Following another meeting to engage the African-American community, last week on August 1st, the Trump administration hosted a “briefing” session which included approximately twenty ministers allegedly representing the community.  Those in attendance thought the discussion was about prison reform, recidivism and other social issues and programs to uplift the community?  As the case with many of these types of events, the discussion was one-sided.  Adding insult to injury it is being reported the administration selected two ministers who were told to make comments.  The primary role for others in attendance was to take part of the photo-op.

One minister who was selected to speak was the slack-jawed Pastor Darryl Scott who heads up the New Spirit Revival Center in Cleveland Heights, Ohio.  He proudly professes his support for Trump, yet his comments are a stark contradiction of Trump’s track-record in dealing with African-Americans.

“The Black ministers who met with Donald Trump denigrated the divine and ancestral legacy of the Black churches in America and they dishonored the ministries of Jesus Christ, the prophets, and those sent by God,”  Rev. Dr, William Lamar of Metropolitan African-American Episcopal church

The consensus from those who attended was disappointment as while Trump did get his coveted photo-op, the ministers did not walk away with any substance or policies or programs to deal with the issues that were purported to be discussed.

While several in attendance were happy to be in the White House with Trump, some must be reminded of the history and focus of the church, “These ministers are just a little worse than Black preachers who sit with Democrats and refuse to demand justice. We sit with emperors, not to take pictures, but to demand the God’s people be free. These preachers know the church, they know Black respectability, they know American civil religion, but they do not know the prophetic tradition of the Black church and they do not know the liberating gospel of Jesus Christ,” Rev. Lamar, Metropolitan AME

Even though this issue occurred a little over a week ago, it is being blown up on social media.  Two videos are listed below to help provide a better perspective on this issue. 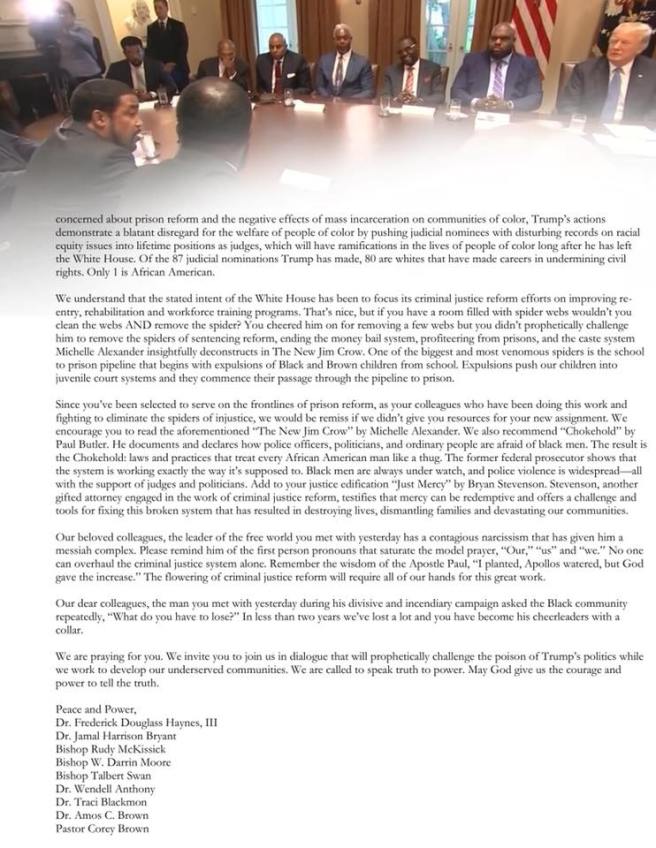