Today the Bureau of Labor Statistics (BLS) released its jobs report which surpassed expectations.  250,000 new jobs were reported for October.  In the political world that is good news.  You would think with employment, the economy and other measures Donald Trump and the GOP (Republican party) brag about, they would be hard pressed for both houses of the chamber (Congress) to be in jeopardy?

The mid-term vote is just days away.  Surely you would think the positive jobs report might be the fuel needed to keep the chamber.  Unfortunately, Trump has communicated very little  to voters about the economy.  Perhaps in doing so and if they are honest, he and his supporters feel they would have to credit the Obama administration with establishing a positive foundation for them being able to reap the benefits they are achieving?   In the world of Trump, that is a no…no.

Instead of the economy, Trump feels he must feed his base one dish; Immigration.  He feels that subject will be enough for his base to out vote the Democrats and opposition voters to keep the chamber.  Some in the GOP aisle are frustrated that he has blown the opportunity gained in 2016 and feel he has been snakebit. They point to his antics and bombastic behavior that will lead many voters to insist a change is the best option to end the polarization he has created.

As it stands right now, despite the jobs report and other economic news, when Trump wakes up next Wednesday the Democrats, who need 23 seats to claim control of the House of Representatives, might wind up with approximately 35.  The Senate is expected to remain in GOP control.  The result will be voters have recognized that a check or balance on the Executive is needed versus having one party controlling all three branches?  At the same time, it must be noted Trump and his supporters are hoping for the same “shocking” result they achieved in 2016, when they faced long odds of winning, yet came out ahead. 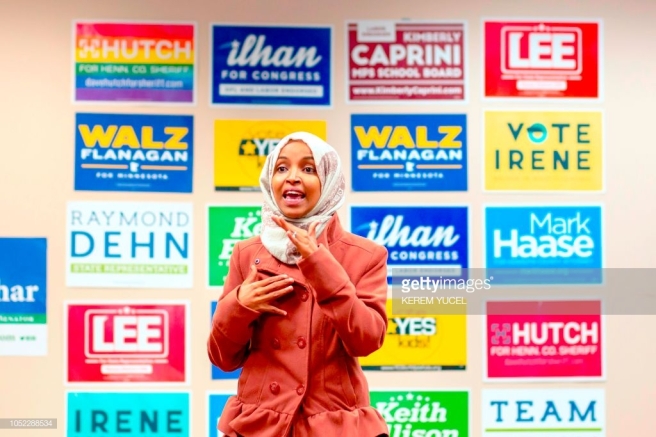 Democratic congressional candidate the Midterm elections, Ilhan Omar, speaks to a group of volunteers in Minneapolis, Minnesota, on October 13, 2018. – Somali-American state legislator Ilhan Omar claimed victory in her primary in Minnesota in August, putting her on track to become one of the first female Muslim members of the US House of Representatives. (Photo by Kerem YUCEL / AFP) (Photo credit should read KEREM YUCEL/AFP/Getty Images)