[Natchez, MS]  We recently completed a trek which took us to the south, specifically Natchez, MS.  My father is buried in the National Cemetery which is reserved for those eligible from their military service.  Down the road is the Natchez City Cemetery, which I also visited as relatives are there as well.

If you have never been to the “south” or unfamiliar with the history, customs or the culture you may come across……. you might have the reaction as my wife Judith in seeing gravesites highlighted with confederate battle flags. 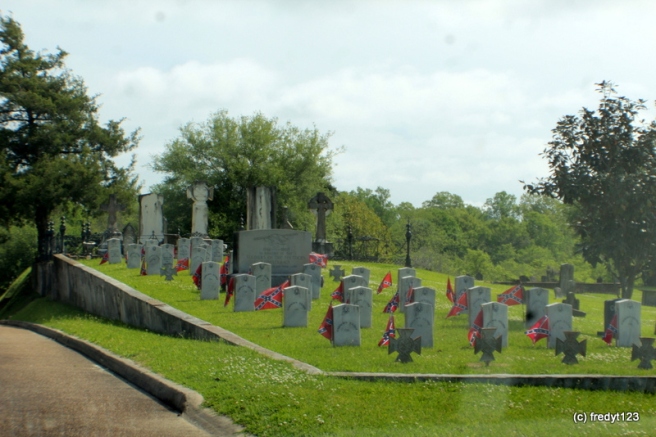 The flags were a sense of pride for those supporting the confederacy.  There are many today, from all over the world who still proudly display support and recognize it as part of their “tradition.”  Whatever the explanation, I respect their choice to be honored by that symbol.  Although, I would encourage those who in 2018 claim the flag as some type of honor (unless, they are burying someone from that era) to immediately enroll in my american history class!!!!

It boils down to education or knowledge

I have friends or know of folk who even today, have adopted the confederate flag.  Their explanation is it has been a “family custom” or “tradition” and such, embrace it with pride.  While some would go ballistic or be willing to disown them, I respect their opinions.  Instead of vilifying them or excoriating them from planet earth I view it as an opportunity to educate and have dialogue, as long as there is genuine communication.

While the flag is embraced by some, and perhaps by more than you might imagine……many do so because they simply conflate reality or historical facts.

So, from most historical accounts the actions of the confederacy were treasonous as their primary attack was to overthrow the current government.

As the Civil War ended, the dynamic of racial equality resulted in violence which still exist in some pockets of our country.  Those in opposition of equality, particularly terrorist groups such as the Klu Klux Klan adopted the confederate battle flag.   That is why even today, many who see the confederate battle flag being used, especially if they are African-American or non-white are reminded of the terror and oppression meted out by those who embrace the flag.

I recall during the Trayvon Martin murder and was completing some research in Sanford, we came across several confederate battle flags flying from homes.  Remarkably, these were noticed in the same tract as the police department!  We simply concluded  that for many they embrace the flag and don’t associate the negative reaction, or don’t care from those who are not like them.

The confederate battle flag is a part of history.  It may be easy to dismiss or prevent honest dialogue, even with those you may consider as friends?  I understand the sense of pride of those who used it during the participation as part of the confederacy.    However, for those who continue to embrace it, perhaps that represents the great opportunity for some basic conversation, education and reality.