Jacques Bordeaux has penned a masterpiece.  I was happy to purchase my copy from Amazon.  Hopefully my review will be posted in the next day or so.

I have known Jacques for over 50 years.  Amazon has specific criteria for reviews which is why I am grateful for my own platform as I am able to stretch out and provide a better perspective of why you may enjoy supporting Jacques and Valerie as they start their “Sintown Saints” book tour. 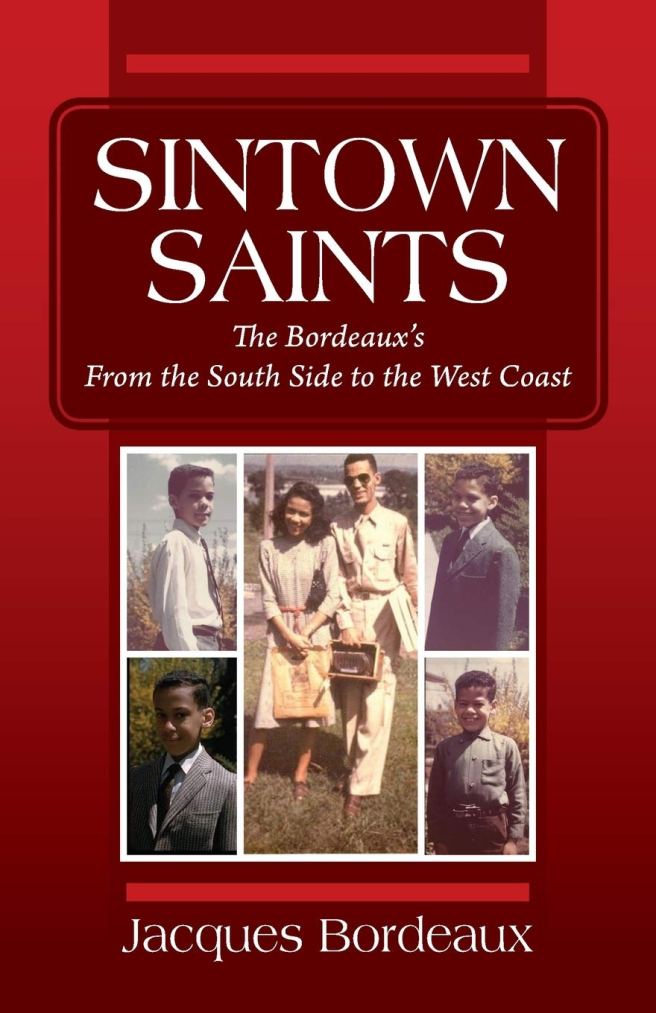 During the early to mid 60’s Los Angeles (affectionately known as L.A.) was going through a cultural transition.  Many families, especially those in the African-American community were dealing with the reality of police harassment, discrimination and other lifestyle issues which thwarted their progress.  As a result folk were packing up and heading out so their kids could have better educational opportunities.  As a young teenager I didn’t understand the significance but I recall my mother and father having a heated argument about what our family’s next move was going to be?  My younger brother Reginald had not been born so it was just Ronald and I, and our two sisters Evelyn and Angela.  My mother gave my father the ultimatum; it was either Pacoima or Pomona!  I don’t remember much more other than Ronald and I trying to figure out how in the hell my father was going to get the truck he grabbed from work which was loaded with the family belongings up and over the I-10 Kellogg Park hill?  It seemed like an impossible straight uphill shot which was nerve-racking if not daunting…….but somehow, we made it.

The migration was incredible as so many came from Los Angeles and it is now as adults, we have come to realize we actually lived in close proximity to each other.  Jacques and his family came to Pomona in 1964.  We got to Pomona in May 1965, about three months before August 11 of that year or the day the Watts Riots started.   We didn’t recognize then but all of us have a better understanding now.  Pomona was known as a regional center or a little larger than a small town.  The tract homes were an attraction for families looking to “stretch out.”  Whites were the majority population and near the middle to southern part of the city was a sizeable Latino population.  The aftermath of the riots opened the floodgates for thousands of African-American families who staked their claim in Pomona.  Many landed in Sintown or close-by developments.  The Bordeaux’s lived on Avalon which is the entry street as you enter Sintown.  We lived on Carlton.  It seemed like everyone in Sintown had brothers and sisters so especially for the kids it was easy to make new friends.  Just about everybody in the tract went to one of three schools; Arroyo Elementary, Marshall Junior High School or Ganesha High School.  As mentioned in “Sintown Saint’s” that connection became part of the Pomona pride.  Marshall and Ganesha was known for fielding competitive athletic teams but not to the level of the established schools; namely Pomona High and Emerson Junior High.  That is until the new transplants from the Los Angeles region settled in.  As Bordeaux states in the book, by the late 60’s Ganesha became a powerhouse in sports and other student activities and the rest is history.

Jacques Bordeaux has used his gift to communicate.  Even though it chronicles his family’s life as they developed through various migrations, he shares the resilience and discipline of family life.  The book is a jewel because it is an easy read but it speaks to a slice of life in the African-American community that some might assume doesn’t exist.  In the Bordeaux’s house the existence was real and not a big deal because they had a commitment to enjoying the benefits of a positive lifestyle.

You can purchase the book from this LINK